The current Tasmanian energy crisis confronts us with a start choice for the energy future of Tasmania, either a retreat to fossil fuels, or an opportunity to take immediate action to ensure that the state has a future powered by renewable energy.

Tasmania’s hydro dam levels have dropped every year since the 2012 peak of 62%. Spring 2015 saw inflows fall to less than half of the previous lowest record for that period, resulting in capacity at 25% on 20 December 2015. On that date the Basslink cable, which had been importing 40% of the electricity used in Tasmania failed. The fault has still not been located and there is no scheduled repair date.

Even with the Tamar Valley Power Station running flat out, and our existing wind capacity, hydro is meeting 70% of our energy needs and dam levels are still dropping.

The core problems is that long term sustainable yield from existing hydro assets and the two existing wind farms is less than annual consumption.  In normal operation Basslink makes up any difference, but this makes it very difficult to make a big impact on storage levels and explains why over the long term Basslink imports more than it exports. 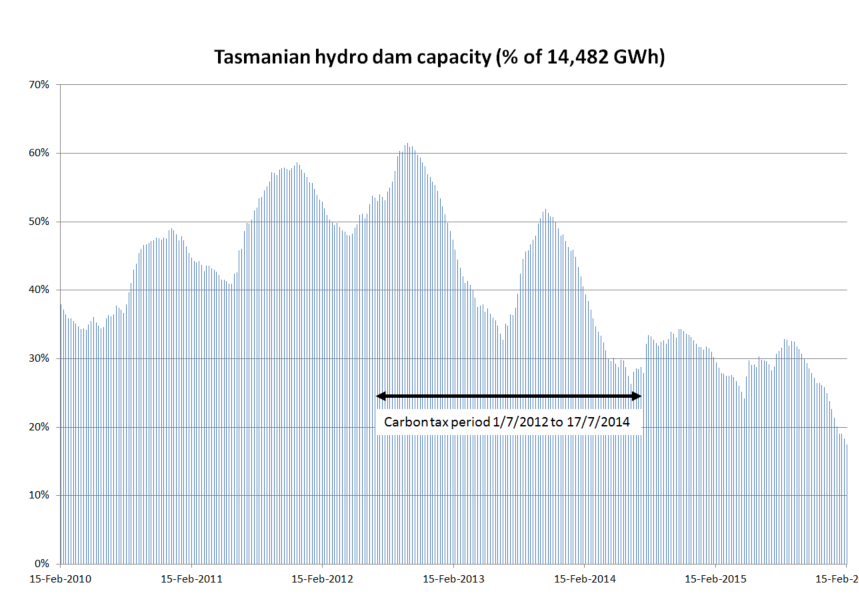 Even if Basslink is fixed soon and rainfall returns to normal there will be a significant challenge to meet the shortfall and rebuild our storages. The government has already flagged that the “longer term strategy now includes securing more gas turbines to expand the Tamar Valley Power Station”.[1]

We believe that a combination of wind, solar and small ‘run-of-river’ hydro can meet our electricity needs and build back our storage levels to provide energy security. The government needs to set out a plan to meet this objective as soon as possible. In the meantime we need a greater emphasis on demand management and energy efficiency which can bring our energy demand and supply into balance more cheaply than running diesel generators.

A variety of sources and locations for new renewable energy generation has many benefits:

What you can do

Basslink: A short summary of risks …, Chris Harries, 29 Jan 2016
History of Basslink and risks and issues in building a second link.
http://tasmaniantimes.com/index.php?/weblog/article/basslink-a-short-summary-of-risks-/