In August 2013, when the solar feed-in tariff was being reduced from 28c to 8c, we identified that solar owners would not get the full value of their solar generation because the meters only offset power generated against consumption on the light and power tariff.   In response to this, the state government instructed Aurora to implement “as soon as practical” a “technical metering solution that provides small customers who connect a distributed generation system from 31 August with the option of off-setting their on-site electricity consumption for hot water and heating – in addition to light and power – before electricity is exported to the grid.”

TREA followed up on this with the previous and current government as well as with Aurora Networks. Initially we were told a solution was not technically feasible. Subsequently we have followed up with TasNetworks who advised that a solution was possible but that it would require special software to be written by EDMI, the meter supplier for Tasmania.

On 30 October 2015 Matthew Groom wrote to Greens energy spokesperson Rosalie Woodruff  and said “Should this testing prove successful, TasNetworks would then proceed with a broader roll out.”

On 1 March 2016 TasNetworks CEO Lance Balcombe wrote to TREA saying that “a workable solution was identified” but would not be implemented because of the cost and because this solution was not compatible with TasNetworks’ long term tariff strategy to move all residential and business customers to time of use network tariffs (in other words the existing bundled light & power and cheaper heating & hot water tariffs would not be available).

The TasNetworks letter suggests that “customers already have options that allow them to fully offset micro-embedded generation”.

Currently the only option available to residential customers is to put all their consumption onto tariff 31 (ie pay 25c instead of 15c for their hot water and heating).

The letter refers to a “Residential Low Voltage Time of Use tariff (TAS93)” but this is a network tariff and Aurora does not offer a retail tariff on this basis. We understand that Aurora intends to offer a residential time of use tariff from July 2016 (and possibly a ‘demand time of use’ tariff) but we will not know until Aurora tariff proposals are released for comment by the Economic Regulators shortly.

Any change of tariff requested by a customer normally involve meter changes which cost from $179 to $250.

None of the ‘solutions’ are fair to solar owners, who have been missing out on getting the full value from their PV purchase, in some cases for over two years.

What we want – offsetting two tariffs

We are calling on Matthew Groom, the state energy Minister to:

TasNetworks announced on 16 March 2015 that 8,200 customers may not have not been correctly paid for the solar power they have exported to the grid. In some cases the problem goes back to 2011. TasNetworks has implemented a program to replace the affected meters at no cost to customers. At the end of May 2015, 1,951 meters had been replaced and the program is on target to replace all 8,200 meters before the end of 2015. To the end of May the average refund per installation was $202 with a range of $0 to in excess $800. The refunds vary widely because they depend not only on the size of the solar installation, but also on whether the customer is on the legacy or current FiT rate, and on the extent to which the customer was consuming power on a heating circuit at the same time as they were generating solar energy. Refunds are not estimates and are based on actual generation and consumption data retrieved from the replaced meters.

TasNetworks have posted a $30 cheque to those who will require a meter change. This is in addition to any future payment for under-metered solar energy fed into the grid.

If you received a cheque and are wondering what to do with it, Andrew Lindner, who identified the metering problem and convinced TasNetworks that it was real, suggests you might like to donate it to a local charity such as the Hobart Women’s Shelter. 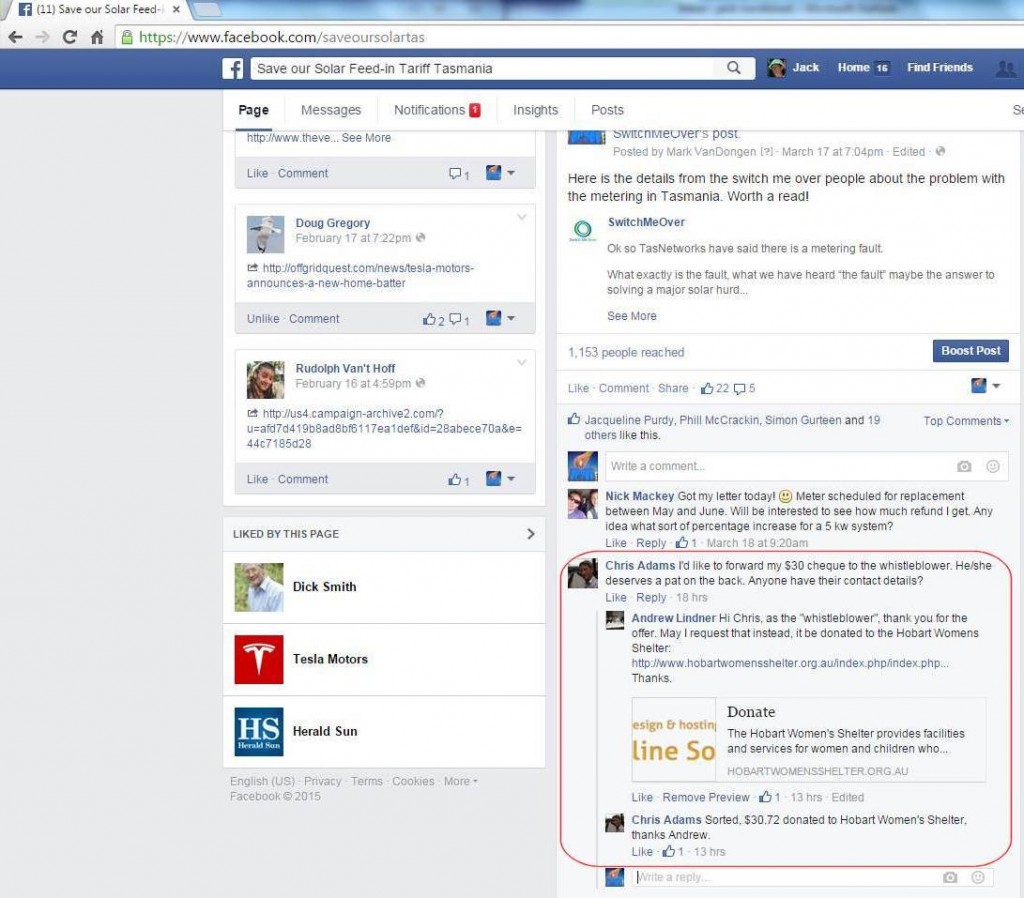