Boom and bust in the solar industry in Tasmania

Home » FrontPage » Boom and bust in the solar industry in Tasmania

As at 7 April 2015 there are over 24,600 solar PV installations in Tasmania with a total installed capacity of over 83 MW.

Boom and bust cycles are a constant in the solar industry due to the way changes in government policy are implemented. The recent experience in Tasmania reflects this.  Analysis by the Tasmanian Renewable Energy Alliance shows there are now less than 200 new installations a month, compared with around 500 a month before the feed-in tariff changed in August 2013. 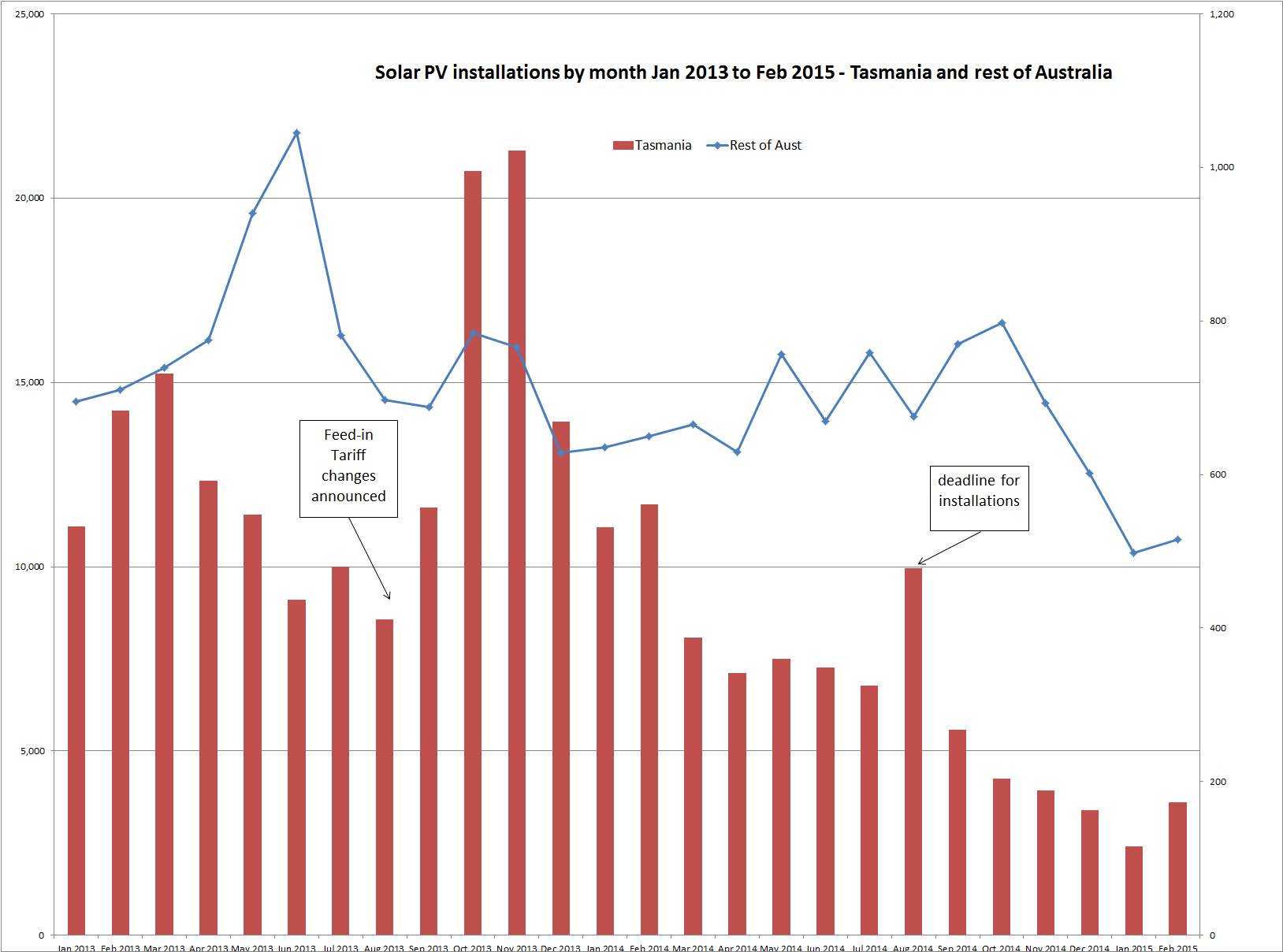 On 18 August 2013 the state government announced that the 28c feed-in tariff would finish on 30 August. Around 6,000 new systems were ordered in the 12 days and customers had until the end of August 2014 to have these systems installed.  This 6000 figure compares with the total of 6,364 systems installed in Tasmania in all of 2012.

The monthly figures show a spike in installations from September 2013 tapering off and then a final burst of installation to meet the deadline. Since then, the installation rate has dropped to less than half the rate before the August 2013 announcement.

Impact on jobs in the solar industry in Tasmania

The Clean Energy Council uses a figure of 15 EFT jobs per MW of capacity installed per year based on surveys of a number of companies on the number of employees they have and amount of solar they install.

Using this figure we estimate that the Tasmanian solar industry would have employed over 300 people in 2012 and over 450 in 2013. This drops to 280 in 2014. At the current installation rate of around 200/month and an average size of around 4.6kW/installation, future employment could drop to around 166 jobs.

This data is derived from two sets of Clean Energy Regulator data for small scale installation by postcode because monthly data is only available for up to two years back from the date of the report. The reports used were the data at 6 January 2015 and 7 April 2015.

A 12 month creation period for registered persons to create small-scale technology certificates applies under the Renewable Energy (Electricity) Act 2000. Therefore previous monthly figures can continue to rise during this period. We have compared the January and April data sets and it appears that after a full month the monthly figures are at around 85% of their final number. We have therefore not graphed the March and April figures from the 7 April data set.